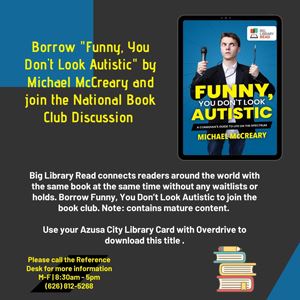 Big Library Read is an opportunity for those with a valid library card to read the same digital title at the same time without any wait lists or holds.

Azusa Library patrons can join thousands of readers around the world in laughter and learning during Big Library Read, the world’s largest digital book club. From March 23–April 13, booklovers can enjoy stand-up comic Michael McCreary’s hilarious yet insightful memoir, Funny, You Don’t Look Autistic, from their public library as an ebook or audiobook with no waitlists or holds. Azusa readers can join by visiting https://scdl.overdrive.com/ or downloading the Libby app, then discuss online at https://discuss.biglibraryread.com/.

Funny, You Don’t Look Autistic is stand-up comic Michael McCreary’s memoir in which he points out that autism "looks" different for just about everyone with Autism Spectrum Disorder (ASD). Diagnosed with ASD at age five, McCreary got hit with the performance bug not much later. During a difficult time in junior high, he started journaling, eventually turning his pain into something empowering—and funny. This unique and hilarious #OwnVoices memoir breaks down what it’s like to live with autism for readers on and off the spectrum. Funny, You Don’t Look Autistic is an invaluable and compelling read for young readers with ASD looking for voices to relate to, as well as for readers hoping to broaden their understanding of ASD.

Big Library Read is an international reading program that simultaneously connects millions of readers around the world with an ebook through public libraries. Funny, You Don’t Look Autistic is the 21st selection of this program which began in 2013 and takes place three times per year. Readers can join an online discussion about the book at https://discuss.biglibraryread.com/. The free program runs for two weeks and only requires an Azusa Library card to get started.

J.K. Rowling is hoping a dash of Harry Potter will help families confined to their homes during the corona virus pandemic.

The author has launched an online initiative, www.harrypotterathome.com, which features quizzes, games and other activities. For the month of April, Rowling also has partnered with the audio publisher-distributor Audible and the library e-book supplier OverDrive for free audio and digital editions of the first Potter book, "Harry Potter and the Philosopher’s Stone." (The U.S. edition is called "Harry Potter’s and the Sorcerer’s Stone").